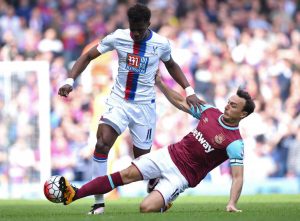 The Football Association of Ireland (FAI) is considering cutting ties with bookmakers. This has renewed calls for sports associations in the UK to do the same, with fears that gambling logos have taken over football shirts and are causing a rise in problem gambling.

So, we wanted to ask you: Should bookmakers in the UK be allowed to sponsor sports teams and events?

Let us know why you think that in the comments below and if you’re curious to see what other people think, check back on our blog on the 1st of September.

This year, the Gaelic Athletic Association have severed their sponsorship deals with gambling companies.

GAA’s Mick Roch, said that “sport these days is besieged by gambling.”

More and more companies have started sponsoring football teams in the Premier League. During the last five years, the number has increased three times, from three to nine companies.

It’s difficult to watch a football game without gambling-related logos appearing on the screen every few seconds. And that’s not surprising, considering that 17 clubs are sponsored by various bookmakers.

Nearly 70% of England’s top division teams will sport a gambling logo on the front of their shirts.

And although the betting/lottery industries are one of the smaller investors into top football leagues in the UK, the amount of funding is increasing.

In the below graph, you can observe just that. Bookmakers and casinos are spending more and more on football sponsorship, while other industries are declining. Hence, the fast rate at which is increasing is causing great concern to organisations such as GambleAware and Gambling Watch UK. 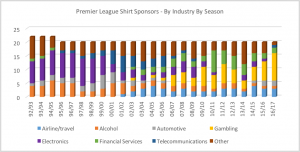 Problem and Underage Gambling On The Rise

The aforementioned concerns expressed by the Football Association of Ireland are just as relevant in the UK.

The government has been fighting problem gambling for years and they don’t seem to be winning. Could the change in advertising policy during sports fix this?

Meanwhile, the problem gambling issue in the country has increased at a similar rate.

According to UKGC, the number of problem gamblers has increased by more than 50% recently.

There were less than 300,000 problem gamblers in the country a few years ago. Today, the number of people who can be classed as problem gamblers is well over 430,000. Plus, more than 2 million are at risk of developing a gambling addiction at any time.

What’s even more alarming is the number of people under the legal limit to gamble that actually get to gamble. It’s estimated that 370,000 children, ages 11-16, gamble on a regular basis and approximately 25,000 of them can be classed as problem gamblers.

Many argue that it’s because sports teams and events, such as Premier League football in the UK, feature so much bookmaker imagery and branding.

Since events like these are a huge part of the culture and are watched by children, experts are calling for a tightening on sports sponsorships by gambling brands.

Some are suggesting that increasing restrictions on gambling advertising in the sports industry might help. It would decrease the presence that gambling companies have in the media to an extent and could help curb the effects it has on problem gambling.

"Poll: Should Top UK Bookmakers Sponsor Sports Events?" was published on 6th August 2019 , posted in Gambling News and was tagged .The post was written by Kristoffer