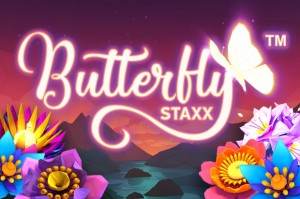 The Butterfly Staxx mobile slot by NetEnt is one of the prettiest slot games that has ever existed since the beginning of time. Right from the start of the game, players will be indulged in serenity and outright gorgeousness of what looks like a tropical paradise. The reels are filled with flowers and fluttering butterflies all over and from there things just get better and better.

The features are as innovative as it can get, and this is the first time that we have seen a slot developer put in a feature that is designed to fill up your whole reel with a single high paying symbol. The results? You can potentially win up to 840x your spin wager in just one re-spin!

As you enter the tropical paradise of Butterfly Staxx, you will be greeted by 5 reels that are paired with 40 paylines. Players will be able to play this game from a mere 20p and high rollers can wager up to £400 per spin if they wish to do so. 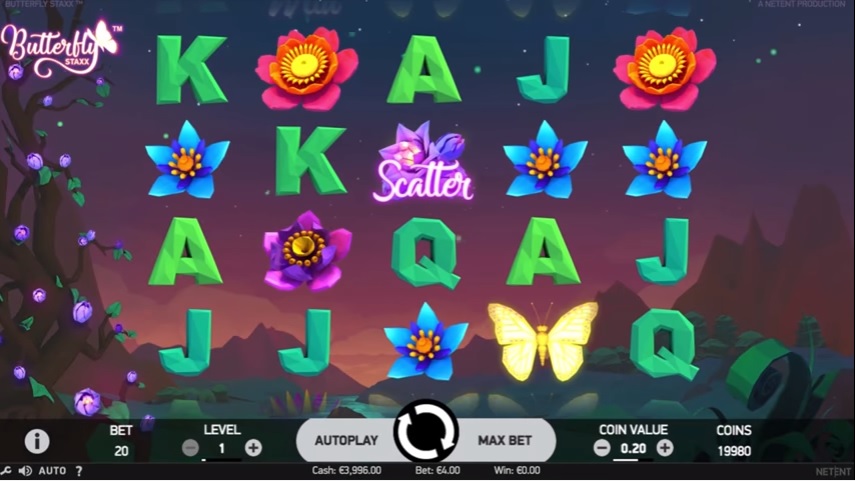 Payouts wise, Butterfly Staxx has been designed in a such a way that it pays out very frequently, albeit with smaller amounts. As such, this game is a low variance game, and would fit casual players who just want to have a go at a game without worrying too much about losing too much money.

In the base game, payouts range between 3x to 8x your spin wager. The Return to Player (RTP) rate of Butterfly Staxx is set to be at 96.8%, beating its peers by quite a huge margin. Maintaining your bank balance shouldn’t be much of an issue in this slot.

NetEnt never disappoints when it comes to bonus feature in any of its games. In total Butterfly Staxx sports two different bonus features on top of the Wilds – speaking of which, comes in the form of a bright purple and yellow flower. As usual, the Wilds are capable of replacing all symbols on your reels to complete winning paylines. 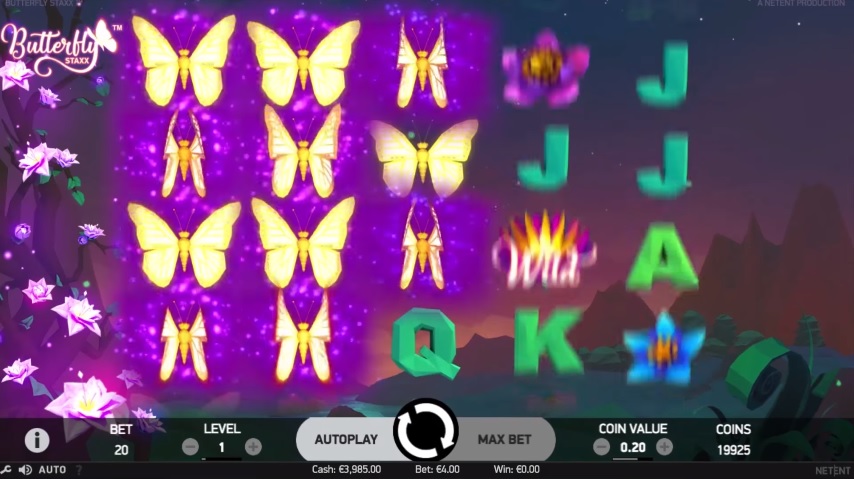 The Butterfly Staxx Re-spins feature is the one that you should be keeping an eye out for all the time. It is triggered whenever you get a stack of butterflies on any reel. Once activated, you will be rewarded a free re-spin.

During the gameplay of this feature, the entire stack of butterflies that you initially received will fly to the most left hand reel. Any additional butterflies you get during re-spins will also fly to the left. As long as you keep getting butterflies, you will continue getting re-spins. 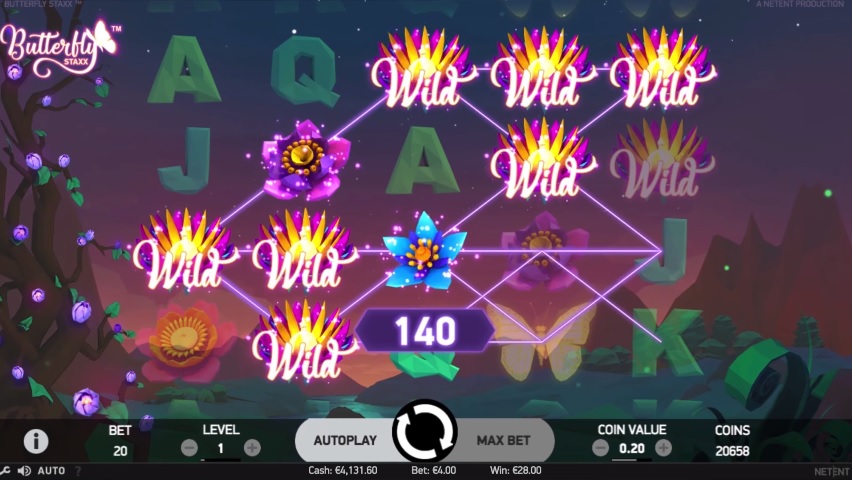 The second feature in this game is the extra spins. To trigger the extra spins, you will need at least three scatter symbols anywhere on your reels. Three, four and five scatters will respectively award you with five, six and seven extra spins.

Before you get disappointed with the small number or extra spins, you will be glad to know that these are no normal extra spins. They come with cocoons and, if you are lucky enough, they will open to reveal the beautiful butterflies, which will in turn trigger the Butterfly Staxx Re-spins feature.

How Does The Game Perform?

You have to give it to NetEnt for knowing how to make a game as stunning as this. Despite only having a couple of bonus features, the attention to detail in Butterfly Staxx is absolutely exquisite. All the symbols fit in perfectly with the theme and calm, but joyful soundtrack will boost your gaming mood for the better.

Don’t even get me started on the animations in this game. It is especially prevalent during the Butterfly Staxx Re-spins feature and it is a sight to behold when the colorful butterflies swarm to take over your reels. 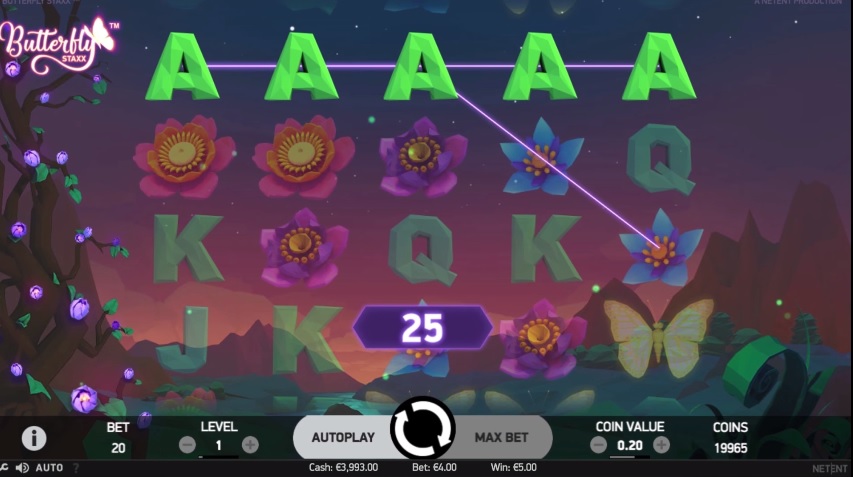 Being a NetEnt Touch game, there is nothing much left to be said about this game’s performance on mobile devices, other than it offers a mobile gaming experience like no other. Everything is carefully laid out and even if you are playing on the smallest of screens, there wouldn’t be any issues. The game also loads pretty quickly, so you can start playing almost instantly.

The Feature That You Should Look Out For

We think that it is pretty obvious that the star attraction in Butterfly Staxx is the Re-spins feature. Whilst this feature is not a mini-game or even the most complicated feature that we have seen in a NetEnt title, it certainly delivers the experience that a high end feature would.

The animations from the flight of the butterflies to the left of your reels and the fact that they remain sticky during your re-spin is simply fascinating to watch. It’s not all show either: on average, this feature pays a minimum of 12x your spin wager whenever activated. 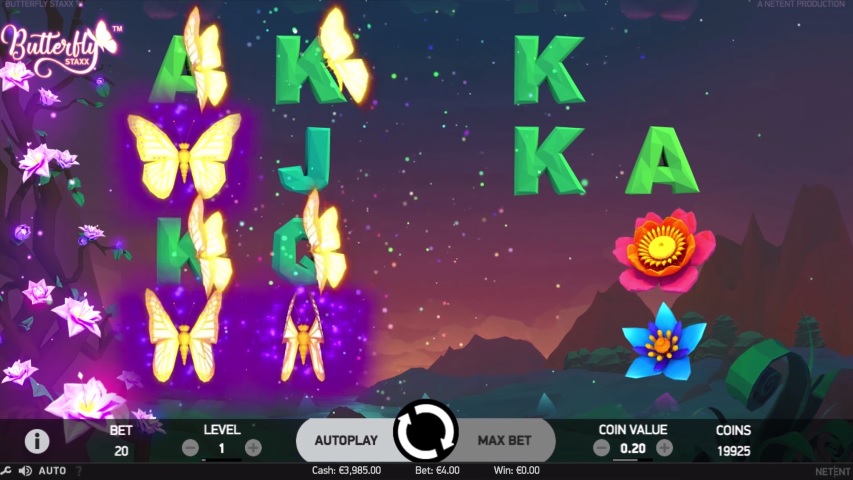 Butterfly Staxx by NetEnt is a type of slot that’s sure to boost your mood after a long day of work. The serene theme combined with the beautiful scenery is something that many other slot games will not be able to offer, making it all the more special.

The frequent payouts will keep you and your bank account entertained and the activation of the bonus features will not fail to put a smile on your face. I highly suggest everyone to give this game a go. For all you know, the fluttering butterflies will keep you coming back for more!

"Butterfly Staxx Mobile Slot Reviewed — Re-Spins Galore!" was published on 30th July 2017 , posted in Slots and was tagged .The post was written by Kristoffer