Net Entertainment has set out to shock and awe the mobile slot game market with their flagship Starburst. Coming across this game, we decided to hop on the hype-wagon and give it a try. First impression of the game is that it’s just like Bejeweled; you will find colourful jewels and rainbow-like symbols on your reels all the time. In case you’re wondering, we think that NetEnt has somehow made all that mishmash of colour work to their advantage. Starburst is indeed a combination of exploding gems and dazzling cosmic bodies imploding, giving the game a galactic journey point-of-view. The question is, is it any good? Let’s check it out.

At the core, Starburst is a three row, five reel and ten win line slot game with a minimum bet of £0.10 and a maximum wager of £100. Despite the low win line number, your wallet will be thankful for the substantial payout amounts and the surprisingly satisfying payout frequency. These combined characteristics give Starburst a medium to low variance with a gargantuan £50,000 Jackpot waiting for its lucky owner. Will it be you? 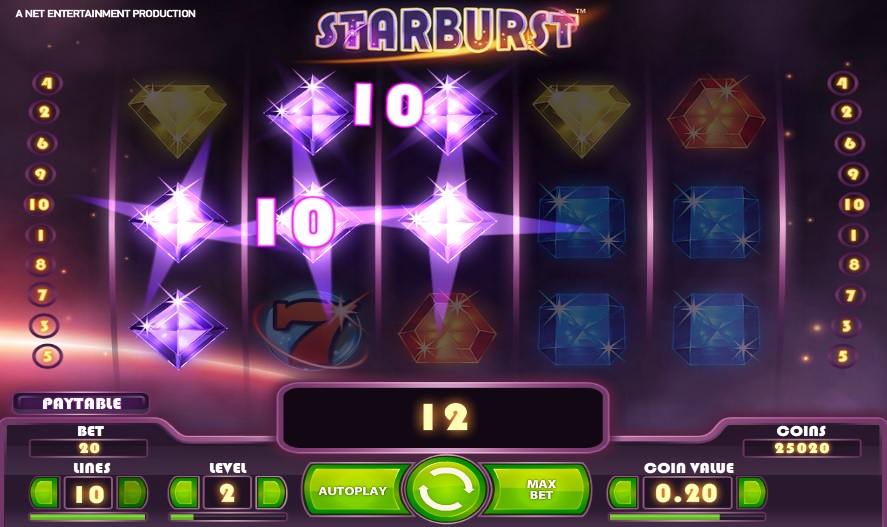 The stunning symbols in this game include a purple square gem, a blue square gem, a yellow diamond gem, a triangular orange gem, a 6-sided green gem, a lucky number 7, a golden BAR and the absolutely stunning Starburst Wild symbol. Now you see what we mean by the rainbow coloured symbols.

An unspoken standard for slot games nowadays is that win lines only count from left to right. Starburst accounts of its low number of paylines by allowing win lines to count from both sides, effectively doubling the paylines and indirectly helping your wallet stay nice and juicy. In other words, Starburst not only pays from left to right, but from right to left too, which was quite an innovative thing back when the game was first released in 2012. 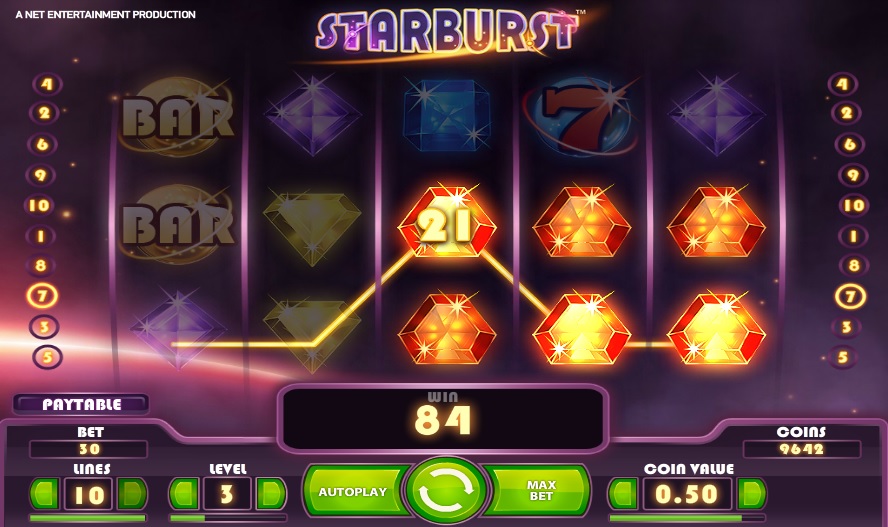 The most prominent feature in this game, and perhaps across all slot games, is the Starburst Wild feature. Upon hitting a Wild symbol on reels two, three or four, the symbol will clone itself on the whole reel and cause other reels to re-spin up to three times if you are lucky with Starburst Wilds.

Wins from each re-spin are clocked, meaning that essentially, this is a cleverly disguised Extra Spin feature. Getting another Starburst Wild symbol on reels two, three and four during a re-spin will cause it to clone itself onto the whole reel and re-spin other reels without Starburst Wilds, this cycle only repeats itself up to three times, however. The presence of large amounts of Starburst Wilds will not only give you vast win lines, but also the symbols themselves give great win multipliers if hit on a win line. 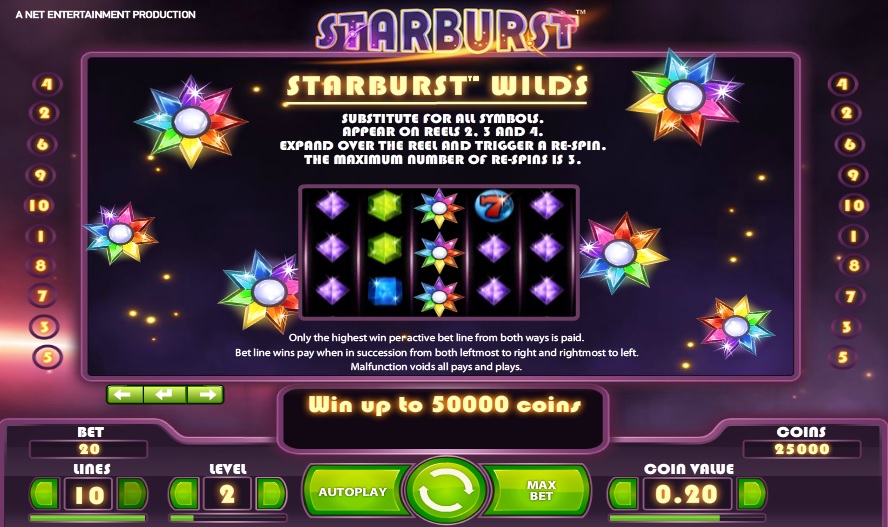 Some people take it for granted, but for a simple but effective game such as Starburst, the autoplay function is the cherry on top because it not only allows you to rest your poor finger, but also allows you to spin reels while you are away from the keyboard. Quite handy if you ask us. Plus, NetEnt is so great at user friendly features that they’ve included a setting that shortens spin animation times.

How Does The Game Perform?

The game has a definitive cosmic feel to it with stars and gems and its radiant visual effects. Everything feels smooth and the response of the game is so prompt it’s surreal. The game is properly optimised across mobile, tablet and PC platforms, so loading times are blazing fast and the gameplay experience is expected to be out of this world. The background music has a very wide sound stage which made us feel like we’re chilling on a slot game while drifting in the middle of space. 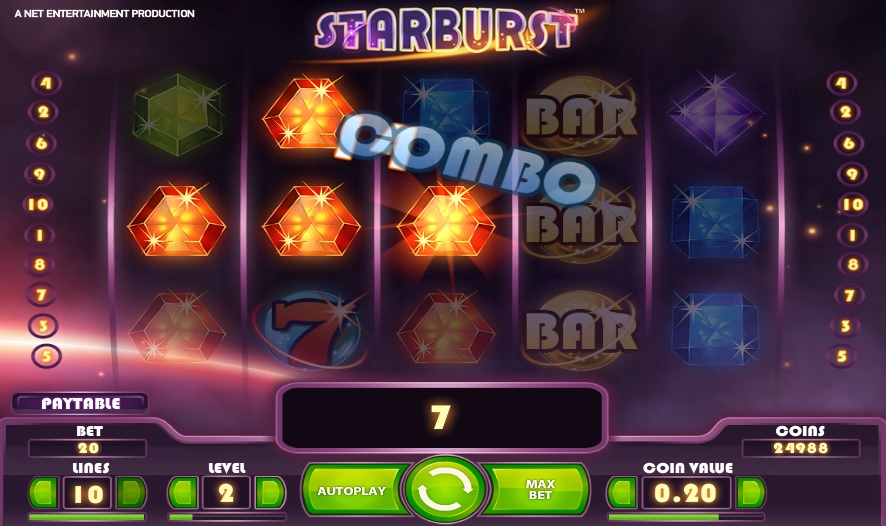 The Feature That You Should Look Out For

You ask us what’s special about Starburst and we’ll come back with a firm and resounding ‘Starburst!’ This has to be one of the best features to be thought up on a slot game. Not only is it simple to understand, Starburst Wilds hides within itself a Extra Spin feature and also potentially higher Jackpot chances.

Actually, calling the Starburst Wild a special feature is very humble and we’d create a whole new category of legendary features just for Starburst Wild. Just keep in mind that the game seemed to reward high wagers more because the wins are of astronomical proportions. 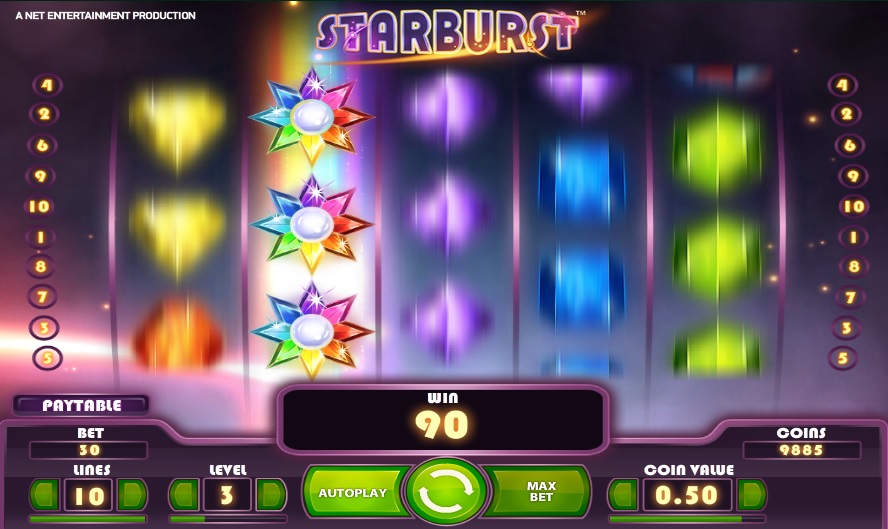 True to its name, Starburst is a slot game that revolves around the Starburst Wild feature and the futuristic arcade game theme bolsters the potential for this game to be one of the very best slot games around. NetEnt really hit the sweet spot with a simple yet engaging game with a clever combination of sound effects, animations, user friendly features and their Starburst Wild mechanics.

‘Hey Starburst, did you just fall from the sky? Because you’re heavenly.’ You didn’t go daft, we just did a cringe line. Now hurry on, start loading up those beautiful reels for your very own Starburst craze.

"Starburst Mobile Slot Reviewed — Simply Stunning" was published on 1st August 2016 , posted in Mobile Gaming and was tagged .The post was written by Kristoffer