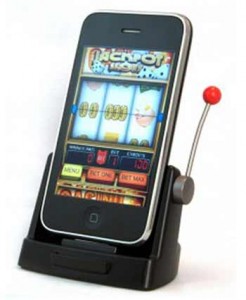 Yes, we know, a post about the best mobile devices isn’t going to be relevant for long. The industry moves on at such a fast pace that the words ‘new’, ‘innovative’ and ‘mobile device’ are almost used as synonyms. This August alone, the new Samsung Galaxy Note 8 and Nokia 8 will be released, while Apple iPhone 8 isn’t far behind either.

However, we’re playing mobile slots right now, so why not enjoy them to the fullest? Why not play them on the best mobile devices that are actually available today? Besides, the phones already in the market are considerably cheaper than the new releases are going to be.

Also, the newest mobile device isn’t necessarily the best one. While new phones usually have better hardware specifications in many respects, it doesn’t mean that they’re better for mobile gambling just because of that. When it comes to mobile casinos, only a number of things are important and a high-resolution camera isn’t one of them. So, let’s take a look at the three best mobile devices that every mobile gambler can get their hands on today. 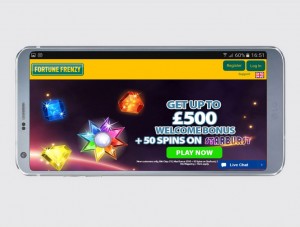 Life’s good is you’ve got an LG G6. It has a slick design and a big screen that comfortably fits the size of your palm, so playing mobile slots will feel more natural than playing on a laptop. The screen size matters too, because the bigger it is, the easier it is to make out all the 100 paylines on a paytable or to press the tiny buttons to adjust the bet size. You won’t have such problems with a G6 because it has a 5.7-inch screen.

The European version of this phone has up to 64GB internal memory and a card slot that accepts up to 256GB additional memory. It also has 4GB RAM and an average quad-core. While that’s not a whole lot, it’s enough to run even the most graphics-heavy mobile slots without any major issues. So turn that high quality on and enjoy all the effects the way you were intended to.

A perfect mobile device for playing slots should also have to endure extended periods of time without an energy source. Fortune Frenzy is firstly and foremostly a mobile casino, so you should be able to play it easily on the go. Sadly, that’s not possible with many older mobiles. LG G6 has a 3300mAh battery, which offers a little extra energy to last a few more spins before you find a power source and recharge. 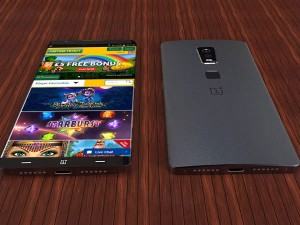 This phone would be a better choice for many people, because it’s both cheaper and mostly superior to the G6. An exception here would be the screen size. While OnePlus 5 is bigger than G6, it has a smaller screen with only 5.5 inches and a 1,080 x 1,920 resolution.

On the other hand, it has the newest version of Android and some versions are also powered by 8 GB RAM and feature 128 GB internal memory. Such a force should run any mobile slot without a flaw for hours on end. In short, this is probably the best phone in the market today in regards to memory. And that’s not surprising considering that it was released just two months ago.

OnePlus 5 also has a much more powerful core: it’s an octa-core that beats even the next phone we’re going to cover in this article. Even though OnePlus 5 is a beast and has the same battery size as LG G6, it lasts considerably longer. You can spin all the slots at Fortune Frenzy for almost the whole day without having to recharge.

To sum up, OnePlus 5 doesn’t have a huge screen, but is a beast of a phone. If we could choose any mobile device we wanted to play mobile slots on, some of us would choose OnePlus 5. The majority, however, would pick something else, mostly because of the unknown aspect of this brand. 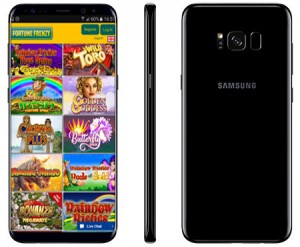 By today’s standards, Galaxy S8+ is simply the best phone any on-the-go gambler could possibly have. While there are mobile devices that surpass S8 Plus in many respects, all of them are only excellent at one or two things. This Samsung is great in all of them and that’s what makes it the best one.

First, it’s huuuuge. A 6.2-inch screen is fitted into a device that’s hardly bigger than any average phone today. It has the same width and is just slightly taller, so it isn’t any more difficult to hold and it provides a display that’s much bigger. You can see even the tiniest detail that game developers put into their slots. After you give your favourite slots a few spins on Galaxy S8+, you won’t want to come back to anything smaller!

To make sure that everything runs smoothly, the phone has 6GM RAM and an octa-core almost as good as the one in OnePlus 5. There’s also 128GB internal storage and a slot that supports microSD cards up to 256 GB. With that much space on your mobile device, you’ll be able to install all ofthe casino software that exists in the world, stream your mobile slot gameplay and store your videos on the phone without ever running out of memory.

Finally, it has one of the best batteries you’ll find in mobile devices today. It’s a 3500mAh Li-Ion battery that should let you play mobile slots at Fortune Frenzy for a whole weekend. So, unexpected power shortages won’t be a problem anymore. You’ll simply forget they used to be an issue unless you start playing with almost no energy left.

"Countdown: Today’s Top Three Mobile Devices To Play Mobile Slots On" was published on 3rd August 2017 , posted in Mobile Technology and was tagged .The post was written by Kristoffer